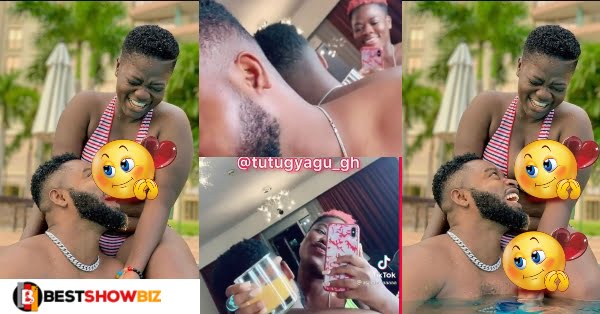 A social media post has accused Tik-Toker Asantewaa of having an extramarital affair with her manager Isaac Agyapong.

According to the IG blog Tutugyagu, Asantewaa has been cheating on her husband with her manager for a long time but has managed to cover it up with her acting career.

Jeffrey Obiri Boahen is not just wealthy but also hails from a wealthy family with political ties in Ghana.

According to what we know so far, Jeffrey Obiri Boahen is the son of NPP politician Lawyer Obiri Boahen.

Obiri Boahen, a lawyer, served as a Minister of State in the Ministry of the Interior under the administration of former President Kuffuor and is currently the Deputy General Secretary of the New Patriotic Party (NPP).

According to reports, Asantewaa, real name Martina Dwamena, prefers having an affair with her manager versus staying with her wedded spouse, and the worst thing is that she has convinced her husband that the manager is simply there to assist her to advance her profession.

The manager appears in the majority of her Tiktok videos, and the chemistry between them is too powerful to ignore.

He recently purchased a brand new car for the short skit actress as a thank you for acquiring over a million followers on social media.

Read Also  Stonebwoy shares photo with his mom statue; fans are stunned by the resemblance
Share