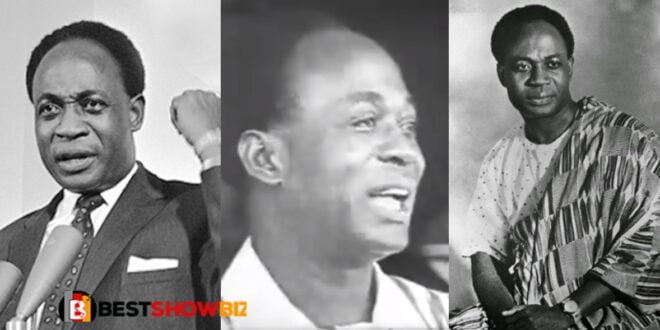 A 62-year-old video from 1959 of Ghana’s first president, Dr. Kwame Nkrumah, making huge promises to Ghanaians during his campaign has surfaced on the internet.

Osagyefo Dr Kwame Nkrumah was seen in the video speaking to a crowd of Ghanaian workers, promising that each person would receive a house and a car.

The crowd could be heard cheering for their president, but they appeared to be in a state of disbelief, prompting Nkrumah to repeat what he was saying in order for his message to sink deep into their hearts.

The video has since gone viral after it popped up, proving to us that politicians come out with huge promises but let us down when they are voted into power.

Tema Harbor, Tema Motorway, Akosombo Dam, Kwame Nkrumah University of Science and Technology, and the Tema Metropolis with its enormous housing infrastructure were all part of Kwame Nkrumah’s infrastructural development.