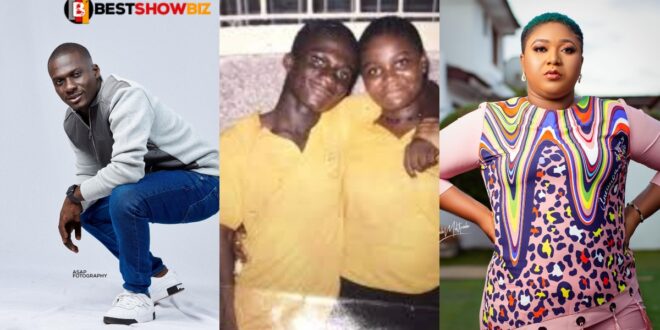 Felix Adomako Mensah, popularly known as Zionfelix, turns 30 years old today, as he announced on social media. Friends, well-wishers, and even celebrities have taken to social media to express their congratulations.

Zionfelix is a well-known Ghanaian blogger who grants interviews, promotes events, uses social media marketing, and blogs. For the past three years, Zionfelix has been well-known in the business.

He began interviewing celebrities in the luxury of his own vehicle, taking them for a trip as he asked their questions. Later, he was given a place and now has his own office where he conducts his interviews.

Xandy Kamal shared a snapshot of herself and Zionfelix when they were little on his special day.

It appears that the two have been close friends from childhood and have gotten along well.

This tweet has sparked a flurry of funny responses from social media users who can not stop laughing. “Chaii nyame ay3 bi oo”

We may deduce from the snapshot that they were friends in high school, specifically senior high.