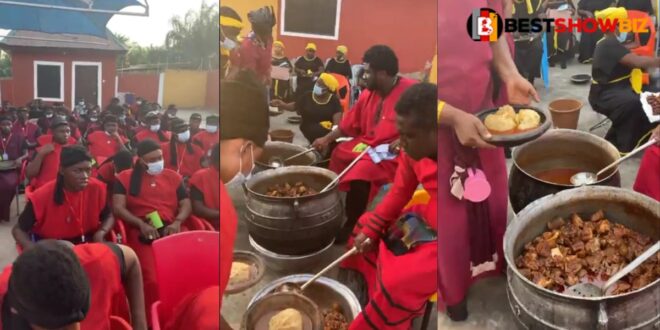 The method in which certain men of GOD approach matters pertaining to Christianity has become a source of worry. This act has resulted in a slew of internet debates on what a Popular Prophet was photographed feeding his church members. As a result, numerous Ghanaians have expressed their displeasure with the trending, prompting some to speculate that it is a definite indicator of the end times.

Prophetesses “Kwabena Boakye Asiamah, the General Overseer and Founder of the “Ajagurajah Movement,” has attracted Ghanaians’ attention for his regular objective of giving his church members a magnificent lunch.

The practice is known as “Chop Bar Pastor,” Killer Nkuto, according to the famous Prophet “.. He goes on to say that “Ajagurajah” is the Spirit behind what he is doing.

Some Ghanaians said in a statement:

“This is unmistakably a portent of the end times. How can a so-called man of GOD fall to the level of feeding his church members a lunch virtually every month? “I am sure there are spiritual ties to this,” says one “Kolang.” “It was said.

“It is worth noting that most Christians have been duped into embracing many erroneous beliefs that have been introduced into Christendom. But I am not shocked since the bus has previously warned us that a day would come when prophets will proliferate, fooling people. And when this happens, we should all be aware that it is a harbinger of impending doom “, said another Ghanaian.

The Popular Man of GOD, on the other hand, who kept the site of his church a secret, invited the entire congregation to “Fufu Communion” His reasoning is that it is critical for every pastor to ensure that his congregation does not go hungry.

Meanwhile, he cooked and distributed the meals among his followers, claiming to have over 1000 followers.