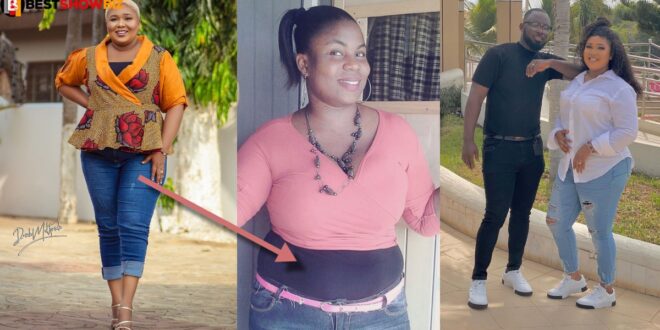 Xandy Kamel, a Kumawood actor and media personality, is one of the celebrities that have been subjected to online abuse.

For obvious reasons, the loudmouth actress is frequently body shamed on the internet. Because of her feisty personality, she is frequently involved in disputes and fights with others.

People react to her in the same way she reacts to them, and as a result, she is frequently body shamed.

On social media, Xandy Kamel and a lady are fighting nasty.

Xandy claims that the lady body shamed her and that she couldn’t let her go.

She mocked a woman named Dorothy by posting a photo of her on social media.

‘This one too is body shaming me. Oh Dorothy, whatever may God forgive you,’ Xandy Kamel commented on the photo.

Read Also  It appears that Lilwin and Dr. Likee are fighting; Watch this video

The lady is dressed casually and has a lot of fat around her belly, indicating that she has a large stomach.