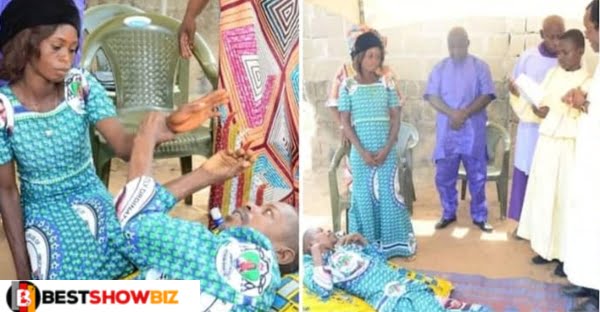 This is true love: lady marries a bedridden man, says she’ll stay with him till the end.

Christiana, a 27-year-old woman has married his lover Terkimbir Benjamin Tyough, a 45-year-old man who is bedridden.

The ceremony came off on December 11th in the presents of a few friends and family of both couples.

Terkimbir Benjamin was an electrician from the Gboko Loca Government Area in the Benue State and his ailment began in March when he fell from an electric pole while on duty.

Since he couldn’t raise the N1.5 million needed to pay for his surgery to repair his spinal cord injury, he remained bedridden.

Christiana, the bride, stated in an interview with BBC News Pidgin that she has a deep love for her husband despite their current predicament and is prepared to stay with him till the end.

Read Also  VIDEO: Hippopotamus appears to have swallowed a little kid whiles he was swimming with friends

“My husband is a good man and I am ready to live with him forever because of the love I have for him,” She said. ”Since he had an accident, neighbors have been the ones supporting us because I don’t have work and my husband was the one providing for the family before the accident”

The husband also seized the opportunity to express his appreciation toward Christiana saying he owes her his life. “Without my wife, I would have died with this condition, I married a good wife and I cannot leave her. Our love is forever,” Benjamin also said.