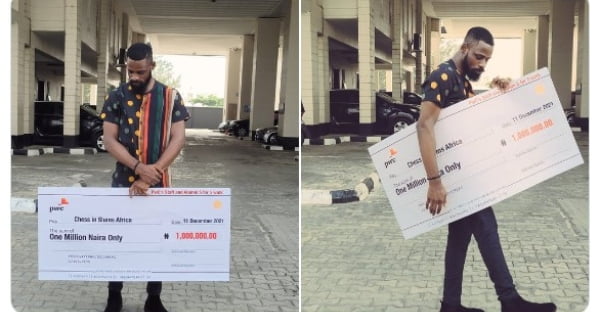 This is the grace of God: Man wins Ghc14,000 grant money he didn’t even apply for.

Tunde Onakoya, a guy, has turned to social media to explain how he got a grant for which he did not apply.

The Nigerian guy has a firm called “Chess In Slums Africa,” which obtained a grant that he did not apply for.

His company’s mission is to aid slum children by removing them from the streets and teaching them how to play chess.

They make certain that they enter them in chess events around Africa after teaching them how to play the game.

Taking to social media, he stated that his firm was nominated for a Price Waterhouse Coopers award by someone he doesn’t know and that despite the voting procedure, they won.

In his words, “Apparently, someone nominated us for @PwC_Nigeria’s annual charity grant and there was even a voting phase that we won.

I didn’t even know all of this was going on till I got a call two days ago to come pick up a million naira [Ghc 14,829.81] cheque at Landmark towers this morning

For everyone who continue to speak for us even in rooms where we’re absent, thank you.”