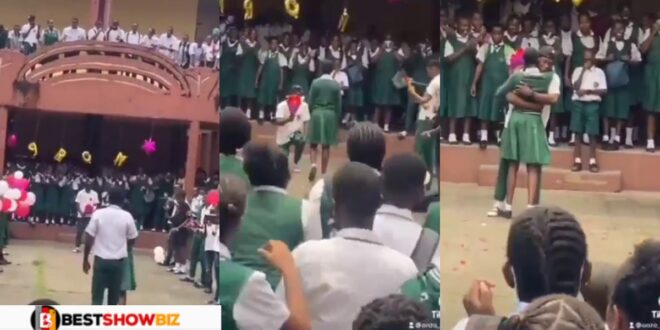 This is serious: JHS student proposes to his girlfriend in front of the whole school at Assembly

A video obtained by bestshowbiz shows a group of primary and junior high school students ecstatically applauding two of their colleagues as they confessed their feelings for each other in front of the entire school.

This video shows a teenage female shamelessly catwalking approaching a young boy, who is then tightly held by her.

Suddenly, the students assembled erupted in great celebration as the two hugged each other and touched their bodies.

On social media, the video has elicited a variety of emotions from viewers. Some people have criticized the school administration for allowing this to happen right in front of them.

Read Also  Video: Lots of girls proposed to me when I was young and beautiful
Share