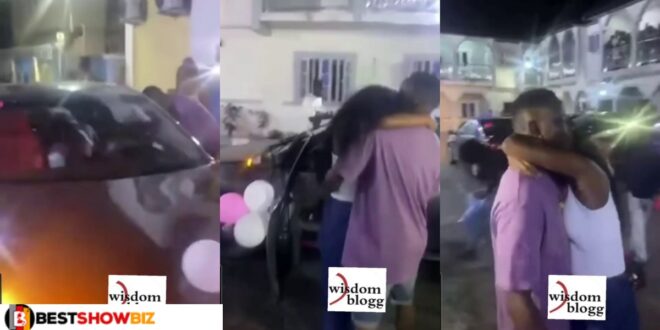 This is beautiful; man buys a brand new car for his girlfriend for accepting his marriage proposal

A man who was overjoyed that his fiancée had accepted his proposal allegedly purchased her a car as a “thank you” for agreeing to marry him.

The young man in the video was seen kneeling with a ring in his hand, proposing to his long-time love to become his Mrs., which she enthusiastically accepted.

After answering yes to the proposal, the lady was surprised to find someone driving a brand new car in the compound, which the guy had arranged for her just for saying yes to his proposal.

When the lady understood the car was meant for her, she sealed the deal with a long and romantic kiss before getting into the car and taking a spin in it.