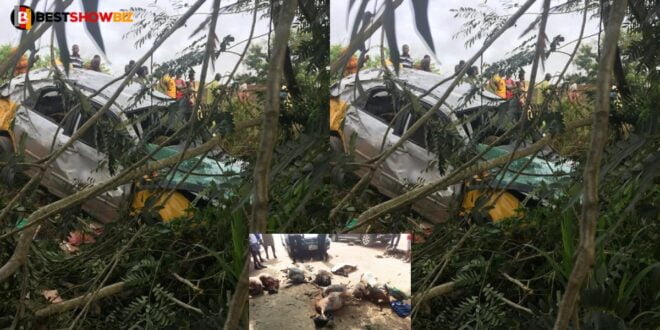 The luck of a notorious gang of goat thieves ran out when their cars, a Toyota Corolla (CR-1097-18) and a Toyota Highlander (GS-2098-19), which were transporting their booty, were involved in an accident after the police followed them along the road.

It was discovered that the police had been provided with information about the group’s malicious actions ahead of time, so when they received a tip, they waited for them just as they were ready to begin their next operation.

When the suspects realized they were being followed by police, they opened fire on them, injuring the driver of the Toyota Corolla, who is now deceased, Isaac, who was shot in the hand as the vehicle crashed into a rock near Abura Kwaduogya in the Abura Asebu Kwamankese district of the Central Region.

below are photos from the scene;