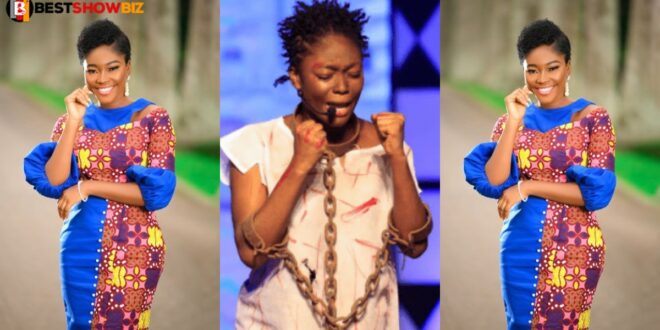 They used juju on my daughter” – Mother of Ghana’s Most Beautiful, Kwansema reveals

Several shocking allegations have been made by the mother of Edith Arthur, better known as Kwansema, a TV3 Ghana’s Most Beautiful (GMB) candidate who competed in the 2021 edition of the show.

People who tuned in to Cape Coast’s Kastle FM on Saturday were surprised to learn that the flagship program, which aims to highlight participants’ abilities, had taken on a new dimension.

When Kwansema’s mother appeared on the Kastle Entertainment Show with Amansan Krakye, she disclosed that her daughter had had a number of spiritual attacks that had a negative impact on her stage performances.

“What the ladies on Ghana’s Most Beautiful are doing indeed goes beyond what we see in the physical realm; some of the ladies use juju.

“Kwansema has been attacked with juju on several occasions, which has sometimes affected her performance on stage. After the Asafo performance, she told me about her ordeal.

“After attacking her spiritually and failing, some of her colleagues decided to attack her physically because some of the girls see her as a threat.”