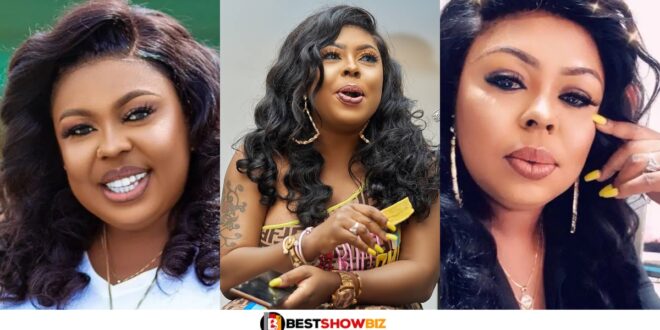 Afia Schwarzenegger has issued an apology to the court in the case brought against her for remarks she made against Chairman Wutumi on the United Showbiz TV show on UTV.

But it looks like social media users are criticizing the controversial comedian for claiming to be tough while begging for forgiveness in court.

In response, Afia unleashed a barrage of angry tweets and posts at those who had mocked her for begging the court for mercy.

In the video, the mother of three says there’s nothing wrong with pleading with the court after you’ve offended it.

According to Afia Schwarzenegger, not attending court when the matter was being heard was an offense, thus there’s nothing wrong with her pleading for mercy.

She clarified that she did not beg any human being, but rather the court, and that educated and learned individuals, such as herself, comprehend the law.

She remarked, in what appeared to be a jab at her detractors, that if their mothers taught them, they would realize there’s nothing wrong with begging the court and that she’s not like them since they beg for clothes, food, and so on.