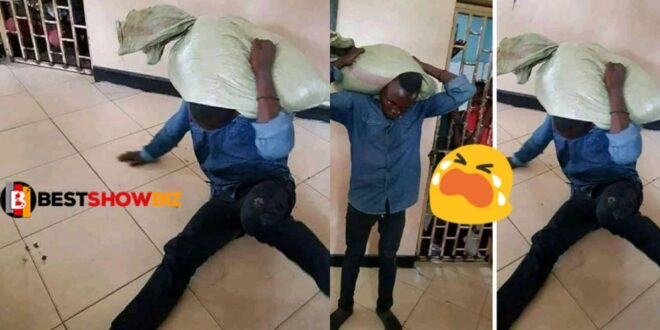 Theif reports himself to the police station after things he stole from an old lady gets stuck on his head.

An armed robber has been apprehended. After stealing from an elderly lady, a man in his late twenties who has made a living out of petty thievery has reported himself to the police.

The man allegedly stole from an elderly lady in Liberia, according to multiple allegations circulating on social media.

The woman was said to be carrying sacks full of an unnamed substance.

The man willingly received it from the old lady and walked away, but when he returned home and tried to remove the sacks from his shoulders, he couldn’t.

His shoulders were encrusted with full sacks.

He had to report himself to the police because he was frustrated and did not know what else to do. He hoped that they would be able to assist him get out of this hopeless position that he had created on his own.

Read Also  "3 years ago, i was a trotro mate, now I work at fidelity bank as an IT employee"- lady shares her story
Share