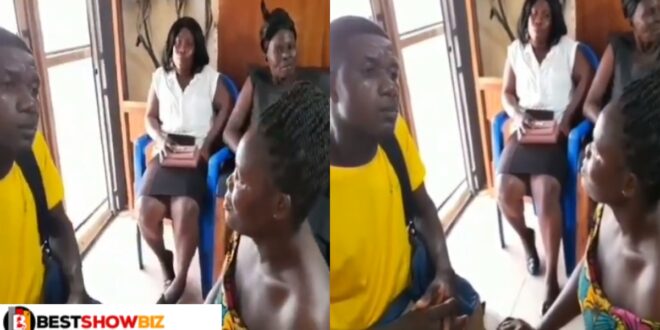 The woman who slapped her husband on live television kneels to beg forgiveness. (video)

A woman who went viral for slapping her own husband for claiming she defecated and urinated into a bowl and placed it under their bed can be seen kneeling to beg her husband in the latest video.

In the recent video, the woman who felt remorse for her actions was seen kneeling and begging her husband to forgive her and give her another chance.

The man, who was also hurt by his wife’s actions, appeared to be hesitant to forgive her, as he stood aside while his wife knelt to beg for another chance to redeem herself.

Netizens who saw the video urged the man to forgive her remorseful wife and take her back.

Read Also  " I slept with her once, she has a boyfriend"- Dr. UN finally says why he won't accept the pregnancy