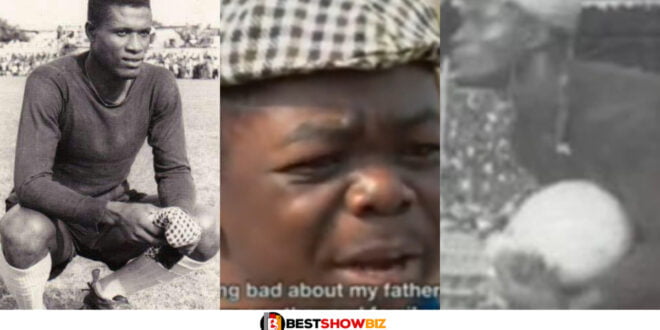 Kofi Antoh, the son of famed Ghanaian goalie Robert Mensah, is said to have killed himself.

To the amazement of those around him, he hung himself in his room, according to his relatives.
Antoh’s death was verified by radio host Blakk Rasta, who said he died three days ago.

“Three days ago, Kofi Anto became nervous and begged his son who was playing around him to go out and play and not create so much noise around him,” the family stated. “It was this occasion that he took to hang himself,” Blakk Rasta is cited by Ghanaweb as saying.

The deceased made headlines lately when he stated that he would never sell his late father’s 50-year-old legendary headwear for any price.

In a December interview, he claimed he felt bonded to the cap and didn’t think it was proper to sell the only artifact that reminded him of his father.

His father, Robert Mensah, is considered as one of Ghana’s finest goalkeepers of all time, having excelled in the 1950s and 1960s.

In his heyday as a goalie, his reflexes, anticipation, and interception were unrivaled. He began his career at Ebusua Dwarfs before moving on to Kumasi Asante Kotoko, where he won the Ghana Premier League and the CAF Champions League.

He was the Black Stars’ first-choice goalkeeper when they won the Africa Cup of Nations (AFCON) in 1963, the first of Ghana’s four continental trophies.

Robert Mensah used to stir up controversy because of the particular headgear he wore while holding the sticks. However, he was stabbed to death in 1971 during a confrontation at a pub.

His distinctive headwear was left to his son, Kofi Antoh, who had been disabled since birth.

Many people are surprised by Antoh’s suicide.