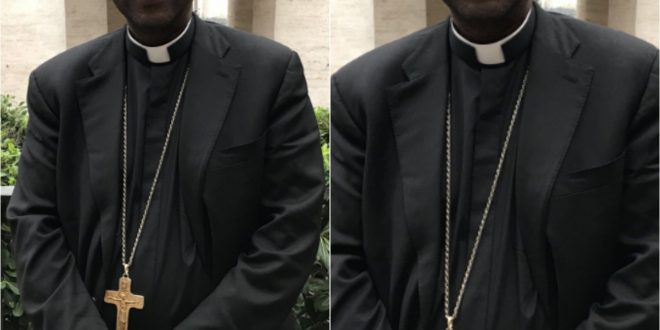 A Roman father in Jamasi-Yonso in the Ashanti Region of Ghana by name Oti Boateng recently passed away and during his funeral service, he made history which himself was not there to witness.

On his funeral day which was held at the same town he resided, a woman stormed the funeral grounds claiming to be the wife of Father Oti Boateng. She along with 9 children claiming they are the biological children of the Roman Father.

This caused a lot of shock to the mourners since per the rules of catholic, priests are not supposed to marry let alone to father children.

To prove her claims, she came with different photos of herself and Father Oti Boateng together with their children having fun.

The Catholic leaders from the Diocese who were at funeral grounds were equally shocked and revealed they had no knowledge of what the woman is claiming. They added that they will meet with the late priest’s family to investigate the claims and make sure the right thing is done for the woman and her children if the claims are true.