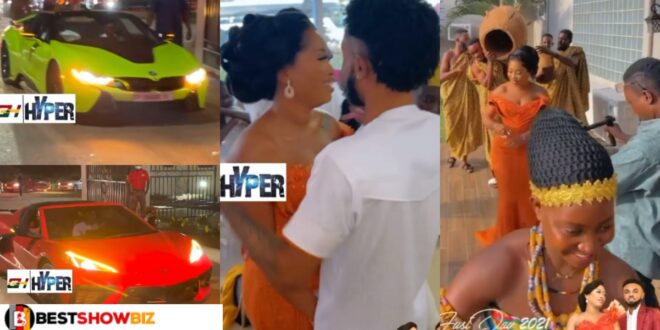 The pressure in Ghana is too much: Another rich boy; Davidogh flaunts his luxury cars as he marries in an Expensive Wedding (videos)

Davido GH, a Ghanaian Instagram big boy who recently made headlines for his flashy social media lifestyle, has joined the table of men!

Davido GH has married his baby mama, who has been identified as Maame.

The young wealthy Ghanaian boy and his wife have taken over from Anita Sefa and her husband.

The couple has planned another lavish wedding ceremony to show off their wealth.

As fans react, photos and videos of their definitely trendy wedding have taken over social media.

In a video, the groom, Davido GH, is seen doing the local Adowa dance while his men cheer him on.

Read Also  i used GHC300 for my wedding, half of it for fufu - okyeame kwame disclose

In another video, he and his wife can be seen making their way to the venue.

Maame, the bride, is also seen in a video jamming with her bridesmaids, who are dressed brightly.

Davido GH and his wife are the town’s newest couple, succeeding Anita Sefa and her husband, Barima Osei Mensah.

So far, what we’ve seen is above average – we don’t know if they intend to go overboard and save us the stress!

Take a look at the photos and videos below;