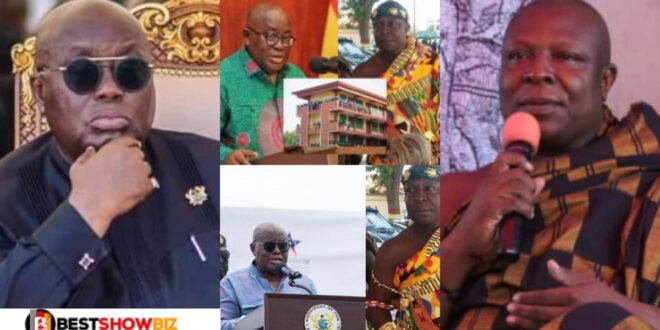 Member of Parliament Samuel Okudzeto Ablakwa has chimed in on Nana Addo’s response to Aflao Traditional Region Chief Torgbui Adzonugaga Amenya Fiti V’s request that the government completes an E-block in the area within four months.

On Thursday, October 21st, 2021, the President granted Kwame Sefa Kayi an interview prior to his arrival to the Greater Accra Region as part of his annual working visit to the 16 regions.

The Chairman General informed the President that the Aflao chief has given his administration a four-month deadline to finish the E-block because he is tired.

The President responded amusingly, saying that if the Chief is tired, he should finish the school himself.

Read Also  "Something is wrong if you are above 21 yrs and don't have Ghc150,000 in your account". Social Media User Jabs Netizens

Hon. Okudzeto Ablakwa, on the other hand, has criticized the President’s remark and has requested him to withdraw it and apologize to the chief and people of Aflao because they deserve it.

“Our revered chiefs and custodians of our proud traditions deserve utmost respect at all times, regardless of which part of the country they exercise their authority,” he said on Facebook.

“No chief in Ghana should be treated with such contempt, disrespect, and condescension.”

“Torgbui Fiti V deserves praise for his bravery in speaking out against the reckless wasteful culture of abandoning inherited projects.”

“We are one people, united in our collective successes and challenges; intemperate language from the President, whose pronouncements should ordinarily be strengthening national cohesion, should be condemned by all well-meaning Ghanaians.”