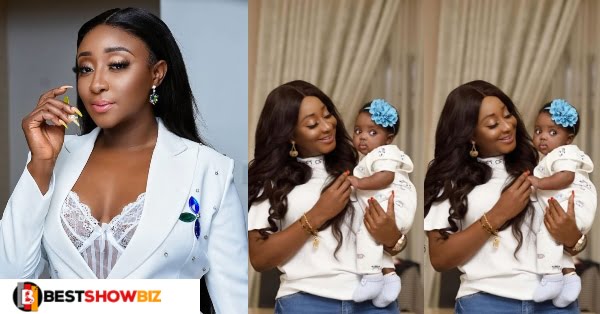 Actress Ini Edo has addressed critical issues surrounding her daughter’s birth, most notably the ownership of the reproductive cell used to conceive her.

Contrary to popular belief, the actress asserts that the seed donor is not a random individual. However, Ini Edo noted that they have no relationship whatsoever and that the individual is just a donor.

The Nigerian actress talked about the seed of the person she used to conceive her daughter. After clarifying, the actress advised her critics to mind their own business and concentrate on what is truly important in the country. She later underlined that her critics should keep their distance from her and her daughter.

Meanwhile, Ini Edo’s reaction is unsurprising, since it stems from several criticisms over her childbirth, prompting her to finally speak out in defense of herself and her kid.

Previously, a Ghanaian writer named Waterz Yidana criticized the actress for employing a random seed donor. According to him, Ini is causing future difficulties for her daughter, who will grow up and begin to doubt her father.

Many of the actress’ supporters have jumped to her defense as they claim that Ini Edo owes no explanations because this is her private life and she has the right to keep it secret.

doctorr_bright: “She doesn’t owe anyone an explanation on this matter.”

callmedamy: “No need to explain…let whoever think whatever that’s their own headache.”

sir_eltee: “Stop explaining to people who don’t deserve an explanation!”