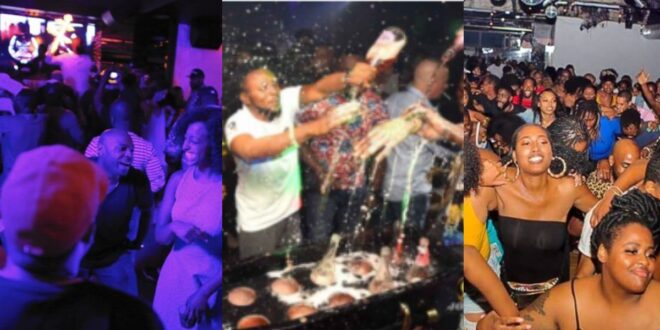 The people who d!ed after attending the Sakawa boy’s birthday party were poisoned with pepper soup.

There’s a new angle to the story we previously told about partygoers who died hours later after attending a sakawa kingpin’s party, which has since gone viral.

In a previous article, we reported that a Twitter user named Oluwapelumi Awotedu announced that a yahoo boy (sakawa boy) had a grand birthday party two Sundays ago, with over 50 of his friends in attendance.

According to his Twitter post, most of the people have died so far, and the death rate is expected to increase. The incident occurred in Alagbole Akute, Lagos, according to him.

The guests were poisoned by pepper soup, according to a new update provided by Sahara Report. According to the investigation, the alleged internet fraudster drove into the bar on a Thursday and ordered drinks for everybody, which he did again the next day, on Friday.

The accused fraudster-cum-ritualist drove into the bar on Saturday, March 20th, and paid for bottles of beer before announcing his birthday. She clarified that the “Yahoo guy” then went to his car and got a cooler of fried chicken, allowing others to eat while sipping their drinks.

“The bartenders had already given him a bottle of beer that the Yahoo boy had paid for, which he drank before leaving to search for his lost phone, and nothing happened to him.” I believe the meat was the cause of death because he took it out of his car’s booth because no one knew where he bought it.

According to her, 25 people were dead, not the 50 that had been reported on social media. “The Yahoo boy did not die; instead, he fled. He has been identified as a wanted man. Some people tried to burn his car because it was parked in Ajuwon, but they were cautioned against it so that the suspect could be found.

The police are aware of the incident and were about to go to the hotel where the incident happened and lock it up but the owner learned about it. and she contacted the police and asked why when she did not make the beer and soup in her hotel,”.