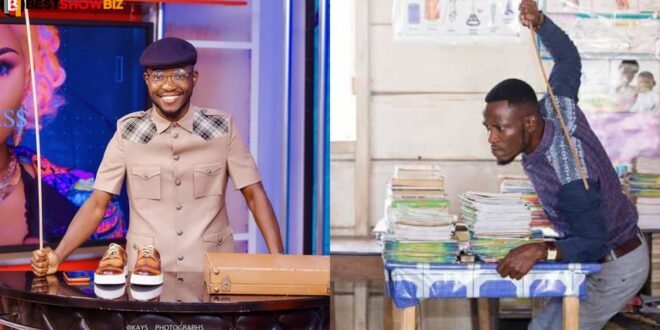 Teacher Kwadwo has been on a one-man mission to improve the Ghana Education Service’s defective system for the past few weeks.

His ‘FIX GES’ campaign drew a lot of attention on social media, prompting the authorities to bring him to the Disciplinary Committee.

According to sources, he was summoned before the Akrofuom District Educational Directorate’s Disciplinary Committee to answer inquiries about “professional misbehavior.”

Teacher Kwadwo, in response to GES’ request, dressed like a warlord in traditional attire, demonstrating his fear of no one.

Teacher Kwadwo was heard saying on a video that he is not frightened to tell the truth and that he will face the committee without fear.

Teacher Kwadwo, on the other hand, described his 8-minute hearing with the Disciplinary Committee as a complete farce.

The meeting, according to Teacher Kwadwo, lasted no longer than 8 minutes, and neither the Director nor Human Resource Personnel were there.

“It was hilarious because when I told him I didn’t want the ‘father and son’ resolution, he said they’d send me another letter inviting me to appear before the committee, so I assured them I’m always ready. When I asked if they were finished, they answered yes and that I could leave. They tried to persuade me to choose the ‘father and son’ resolution, as is customary. Teacher Kwadwo revealed that the entire meeting lasted only 8 minutes.