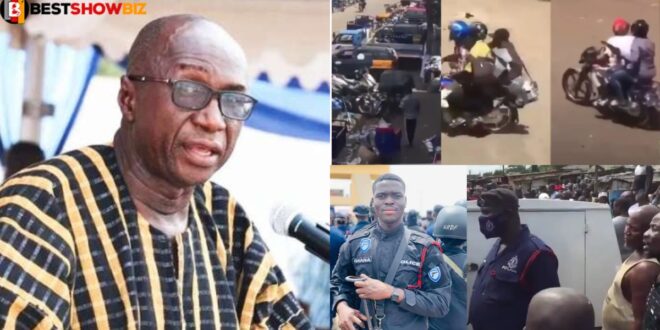 The Interior Minister, Mr. Ambrose Dery, has revealed that the guy who has CCTV evidence of the robbery attack on a bullion vehicle has refused to hand it over to the police.

The Interior Minister went on a television station to demand that the guy hand over the footage to authorities so that police could apprehend the robbers.

A police officer and another person were killed in the historic bullion van heist at Jamestown on the Korle-bu route.

In the bullion van, the thieves also got off with an undisclosed sum of money.

Mr. Dery told TV3 in an exclusive interview that the police had notified him of the man’s refusal to disclose the CCTV footage to aid in the apprehension of the thieves.

Read Also  "Lil win should stop the envy and admit Dr. likee is the man of the moment"- Yaw Dabo

The man wants to exchange the CCTV footage for money, according to him and has stated that he would not disclose it until he is paid.

“This matter should be dealt with quickly as possible.  It happened in the day time but they raise an issue that  I think I want to use this forum  to appeal.  They say there is person who owns a CCTV in the vicinity.

“The Police are asking that they be given the recording of the CCTV  but there was resistance from the owner. I want to use this  medium to appeal  to him to cooperate  and to appeal to all those person  who were in the vicinity  to assist the Police on whatever description  or whatever information that they have  to enable us track them.”