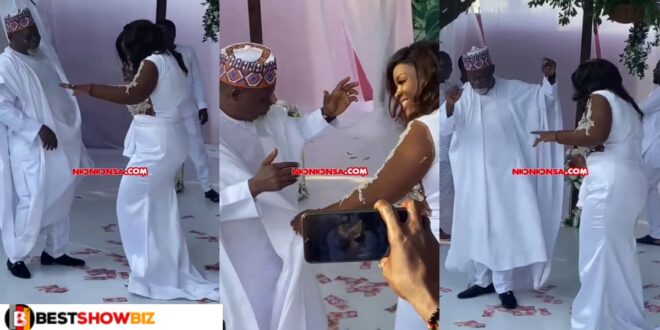 Dorinda, Ghana’s legendary pugilist’s daughter, was given away over the weekend.

Dorinda and her darling tied the knot in Accra over the weekend.

Azumah Nelson looks very proud during the traditional father-daughter dance in a video from the ceremony that has gone viral.

As Amakye Dede’s ‘Sokoo Na Mmaa P3’ plays in the background, Azumah ‘Zoom Zoom’ and his daughter take to the dancefloor.

On the happiest day of his daughter’s life, the legendary boxer demonstrated his silky dance moves.

Azumah delivered as he boogied together with his daughter while being sprayed with Ghc 1 notes.

If the gentleman marrying Azumah Nelson’s daughter has any thoughts of cheating on her, according to social media users, he is dead.

One user commented: “This man is in trouble when he cheats,”