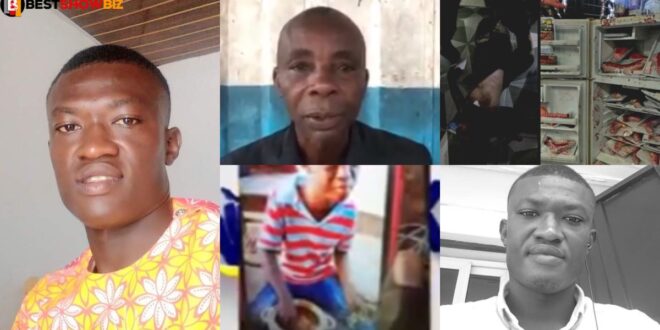 The killer is my business partner – Father of the murdered boy

The father of Stephen Sarpong, a 15-year-old kid who was murdered by a guy in Sunyani, has spoken out about his son’s death.

According to the father, the suspect, Richard Appiah, who he claimed was his business partner, a friend, and a neighbor astonished him with his heinous act.

After the JHS 2 student’s body parts were discovered with the lifeless body of his 12-year-old step-brother, Loius Agyemang, and another unidentified victim, Sunyani police arrested the 28-year-old male.

George Akuffo Dampare, the Inspector-General of Police, and his colleagues have come to Sunyani, the Bono Regional capital, to investigate the deaths of three persons in Alaska, an Abesim neighborhood.

After the body parts of a JHS 2 student, as well as the lifeless body of his 12-year-old stepbrother and another unnamed person, were discovered in a double door freezer, Sunyani police arrested Richard Appiah, 28.

Despite the early morning rains, people of Abesim have congregated outside the Abesim Police station to await the arrival of the IGP.

The IGP is currently meeting with his team at the Abesim police station in a closed-door meeting, and he will also pay a visit to the victim’s family.

Read Also  "Eye witness stole the over GHC 100,000 after robbers were shot"- Police claims only GHC 2,500 was recovered
Share