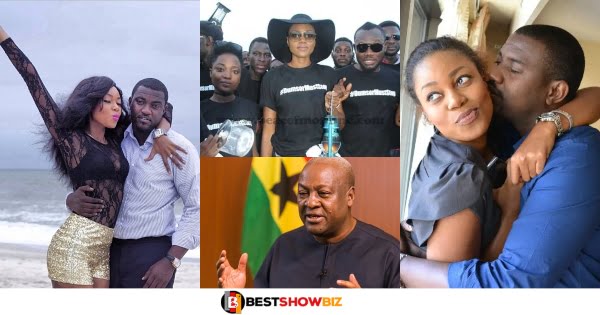 John Dumelo, who used to be an actor and is now a politician, said that Yvonne Nelson’s activism during former President Mahama’s time in office was useless.

He says that whatever made Yvonne Nelson lead the “Dumsor” protest at the time was wrong and didn’t fit the situation at the time.

John Dumelo confronted Yvonne Nelson in the Adom FM studios, pointing accusing fingers at the actress. He went on to say that she hurried into mobilizing people to protest the Mahama regime.

Former President Mahama solved the dumsor menace before leaving office, according to John Dumelo, who explained why he thought the demo was useless.

“I don’t believe it was required.” Let me explain why. Because the president (then-president John Mahama) promised to fix the problem at the time. That’s what he stated, and he rectified it before leaving. It’s a proven fact.

“I’m sure people were fed up at that point in time when Yvonne spearheaded the march. As a result, they needed to take action. But (ex-President) Mahama has promised to rectify it.”

The Dumsor Demo, which took place in 2015 and was led by Yvonne Nelson,  against the unpredictable power supply of the time.

Prince David Osei, Van Vicker, and other well-known people took part in the event, which got a lot of attention.

After a few years, John Dumelo said that the march didn’t do anything and tried to get Yvonne Nelson to organize a similar protest against the NPP government.