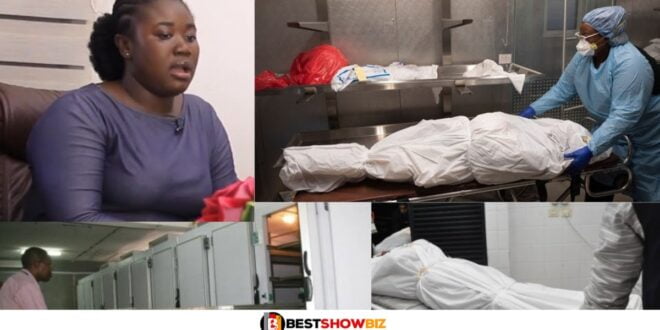 A morgue worker from Ghana named Sandra Aku-Sika, who is only 26 years old, has shared a terrifying description of her work with the deceased.

Sandra claimed this during an interview with the Kumawood actress Esther Donkor, best known by her stage name Esi GuyGuy. Sandra said that dead bodies had a way of transmitting their feelings to people like herself.

The lady claims that the attendants often seek the dead for permission before handling them in any way, including when attempting to dress them or flip them over.

“There are times when you see the corpse and the facial expression alone tells you they are not happy. So you have to talk to them. Sometimes, it takes the intervention of their kids or relatives to convince them before we take any action,” she said.

Read Also  "The tin tomatoes and gifts you gave me are finished, I want to come again"- Selly Gelly begs Nana Ama Mcbrown

Sandra went on to say that the dead sometimes cry, which makes her sad because it usually means they were in pain in their last moments of life.

The bold young girl continued by saying that the fact that she has the profession that she does makes it difficult for her to find a spouse because many men are reluctant to interact with people who have jobs similar to hers.