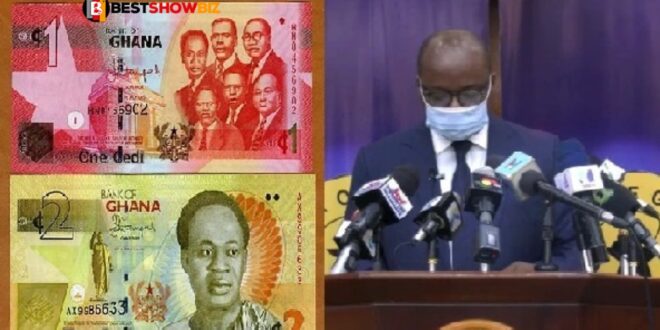 Dr. Ernest Addison, the Governor of the Bank of Ghana, has indicated that the GHC 1 and GHC 2 commemorative notes will be phased out of circulation soon.

On Monday, September 27th, he mentioned this at the 102nd Monetary Policy Committee (MPC) press conference in Accra.

“Both the GHC1 and GHC2 notes would eventually be phased out because they are not cost-effective in terms of printing costs,” Dr. Addison added.

“These are widely circulated notes that come back torn and soiled, making it difficult for our currency processing machines to process them…”

“As a result, in the last two years, we’ve introduced the GHC2 coin. You’d think it’d eventually fill the same role as the GHC2 note does.”

In terms of the local currency’s performance, he stated that the Ghana Cedi has done well, with a year-to-date depreciation of 1.8 percent.

Foreign investor behavior has not changed as a result of the country’s greater sovereign spread, as net monthly purchases of securities on both the debt and equities markets remain generally favorable.

“Rising interest rates in advanced economies as a result of tapering may pose some risks in the future.

“However, in the short term, the strong reserve build-up and foreign exchange inflows from the recent SDR allocation, as well as expected syndicated cocoa loan proceeds, should help to cushion currency pressures.”