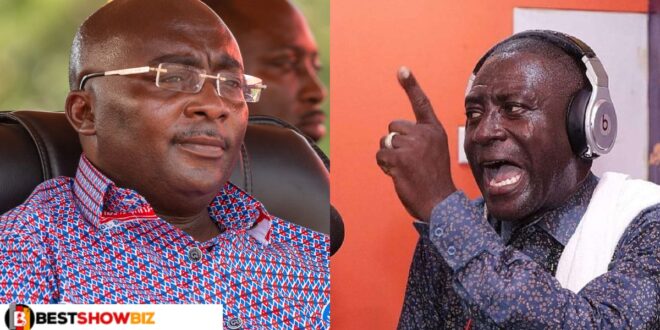 “Tell Bawumia leadership is not about degrees and big head, but common sense”- Captain smart

Captain Smart stated that leadership is not about degrees, but rather common sense.

Dr. Mahamudu Bawumia, Ghana’s Vice President, is facing the wrath of Ghana’s most popular journalist today on Onua TV, as he sends a very bold message to him.

He begged his listeners to spread the word till it reached Dr. Bawumia. “Tell Dr. Bawumia and make him understand that having a degree has nothing to do with leadership.” Tell him that being a leader is all about common sense. Most of our leaders lack this quality, and as a result, we struggle.”

“I am the morning show’s king.” Nobody will be able to take my place. In Ghana, I am in charge of the media. “I told my employer and producer to fire me or stop calling me the King of morning shows if I don’t deliver to gain the most viewers.”

“Which station has surpassed 12,000 views in a matter of minutes?” I’ve shattered the record. I’ve set a high standard for myself. You won’t be able to defeat me”. Captain Smart said