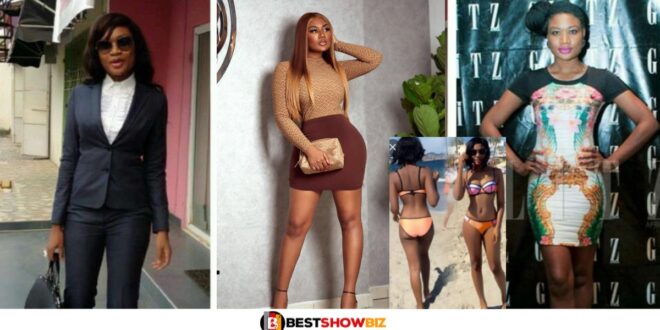 TBT: Check Out The Massive Transformation Of Lawyer Sandra Ankobia

As of right now, Sandra Ankobia is one of Ghana’s hottest and most curvy celebrities.

The gorgeous celebrity is a professional Ghanaian lawyer, television personality, philanthropist, and businesswoman.

Nowadays, it is common for celebrities to have cosmetic surgery to achieve a desired physical form.

Many Ghanaian female celebrities have been accused of getting buttock enhancement in order to achieve a desirable body shape.

Sandra Ankobia, the ever-charming famous lawyer and television personality, is one of them.

The famous lawyer and social media celebrity are some of the Ghanaian celebrities accused of buttocks expansion, or better yet, buttocks enhancement. She claims she hasn’t had any hidden surgery.

Sandra Ankobia, the attractive and trendy lawyer, was born on May 18th, 1993 in Accra, Ghana.

Sandra first appeared on the fashion and entertainment scene in 2002, when she was 19 years old.

Read Also  Video: Netizens shame Bobrisky for dressing like a man to visit his family house

Sandra, the stylish lawyer whose buttocks and form have suddenly altered, insists she has not undergone any surgery to augment her buttocks, but many Ghanaians assume she has undergone surgery to improve her body shape.

Sandra, the gorgeous lawyer, is said to be the third of four children. Naval Captain IK Ankobiah (Rtd) and Mrs. Rita Ankobiah gave birth to her.

Between 2005 through 2009, Ankobia studied International and Commercial Law with a focus on World Trade at the University of Buckingham (LLB, LLM).

Sandra has received several prizes and distinctions during her career. She is the creator of Emerald Paradise Enterprise, a television production firm.

Sandra Ankobia, a lawyer, was designated as an ambassador for women’s football in Ghana by the Ministry of Youth and Sports in 2016.

She was thrilled with the opportunity and is dedicated to generating funding, growing awareness, and increasing patronage of the women’s game.

Check out her old and current photographs.