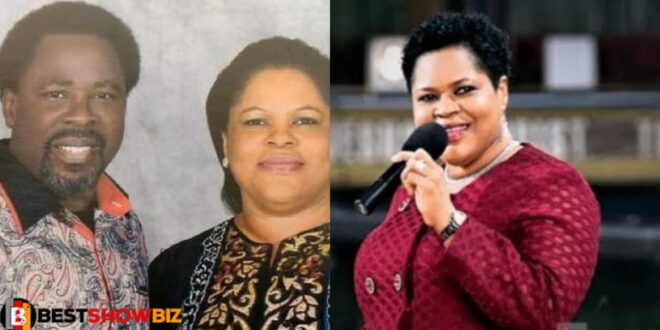 TB Joshua’s wife to head the church after a long fight with elders as to who should lead.

Until further notice, Evelyn Joshua, the late Prophet Temitope Balogun Joshua’s wife, will be in charge of organizing the business of the Synagogue Church of All Nations (SCOAN).

Following the death of the church’s founder, Prophet T.B Joshua, the church issued a statement announcing the new adjustments in order to dispel concerns about a leadership problem.

According to social media speculation, since the founder’s death, the church authorities have been fighting over who deserves to manage and control the church’s activities.

According to a statement made by the church’s leadership, the elders have appointed Mrs. Evelyn Joshua to lead the church for the time being until they settle on a permanent leader.

The following was part of the statement:

”The sequence of events clearly points to an attempt by some mischief makers to draw the ministry into unnecessary controversies.

“Mrs Evelyn Joshua is in a mourning mood, following the burial of her late husband on Friday 9 July, 2021, and as a responsible wife and mother, the least favour she deserves from well-meaning Nigerians is for them to respect the family’s privacy at these trying times. Rather than fan the embers of strife and animosity, she has remained focused on preserving the legacies of her late husband.

“Be informed that at the appropriate time, the new leader of the ministry shall be made known, according to the move of the Holy Spirit. For now, Mrs. Evelyn Joshua is in charge of coordinating the affairs of the church”