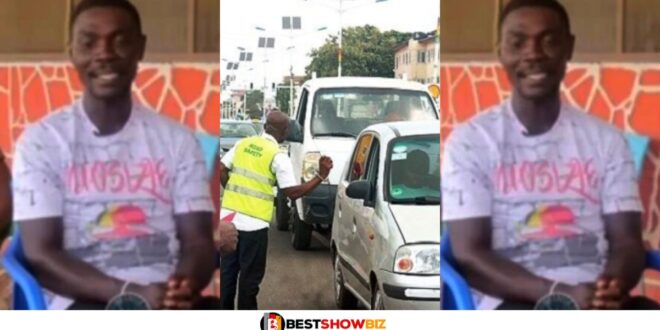 David Ayensu, a taxi driver, was found guilty of attempting to bribe a law enforcement officer and was given a sentence of two years in prison as a result of his actions.

At barriers, there is an ongoing custom that takes place between a subset of commercial drivers and a subset of police officers. When they are caught breaking the rules, some drivers are known to offer money as bribes to the police officers who pulled them over.

On the other hand, it would appear that this driver did not have any luck on his side when a Ghana Police Service officer from the Traffic and Transport Department (MTTD) arrested him. According to reports, the driver was attempting to bribe the police officer with five Ghana dollars.

When the officer pulled him over, he discovered that he was driving with a driver’s license that had expired.
During an interview with Crime Check TV, he made the following statements:

“My renewed license was seized by another police officer so I was using an old one. I knew I had erred so when the officer took the expired license, I quickly took out Ghc 5 and filed it in an AMA operational card, and handed it to him,”

The driver stated to the officer conducting the crime check that when the police officer refused the bribe, he immediately sped off, but the other police officer pursued him.

The other officer chased me with a motorbike but I refused to stop even when some pedestrians prompted me. I crossed the yellow light at a point where the officer caught up with me,” he recounted.

“I was fined One Thousand Eight Hundred Ghana cedis but I could not pay. I was jailed for two years at the Ankaful Main Prison.”