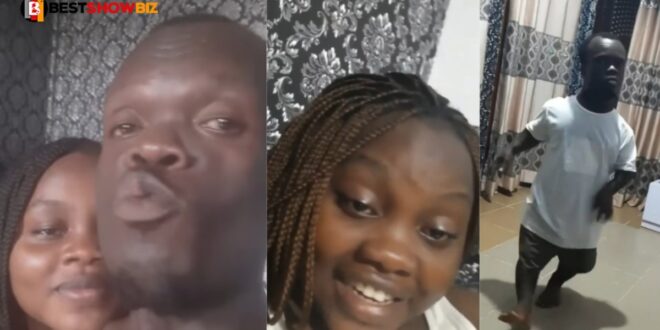 Nwaogu Udochukwu Victor, nicknamed Nkubi, a diminutive actor, has been caught serving a couple of goals with his wife once again in a new video that is gaining popularity on social media.

Following the events depicted in the film, he is seen warning his wife, Vivian Nkeiruka, to refrain from wearing his outfits, with the reason for this being fairly clear.

The fact that his wife is able-bodied, as opposed to him, means that she unavoidably ends up enlarging his clothes when she puts them on because of his small size.

In the sweet video, the OAP and actor are seen urging his wife to quit wearing his boxers and singlet, but she refuses to do so in a romantic manner.

She claims she has the right to put on her husband’s clothing because she is his wife, but Nkubi is not having it and wants her to stop since she expands the clothes for him because she is bigger than him.

When Nwaogu Udochukwu Victor and Ofoegbu Vivian Nkeiruka tied the knot in February 2021, they did so despite all of the harsh remarks that surrounded them and followed them. Today, their relationship is even stronger than it was when they first tied the knot.

watch their romantic video below;