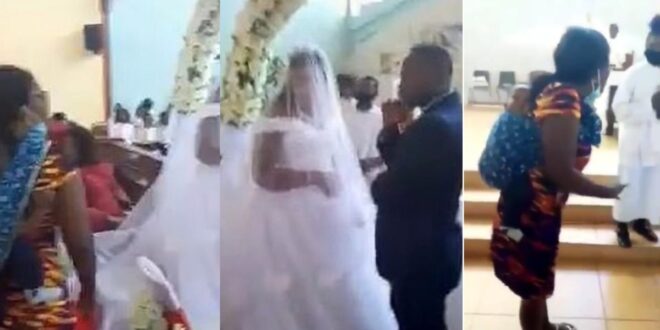 A furious woman disrupted a wedding ceremony and ordered that it be halted.

The groom, according to the Zambian lady, is her husband.

The man reportedly told his wife that he was leaving town for work but was rather going to marry another lady.

The wife learned of his preparations and ran to the church to stop the service, according to the Zambian reporter who filed the incident.

The disturbing video shows her marching up the aisle and dramatically telling the audience, “This wedding can’t go on… “This is man is my husband,”.

The announcement of the woman elicited gasps from the audience, whilst the groom stood there with his hand on his chin and the bride said nothing.

The guy has three daughters, according to the Daily Mail.

Zambia has two distinct marriage structures, one based on traditional law and the other on contemporary legislation.