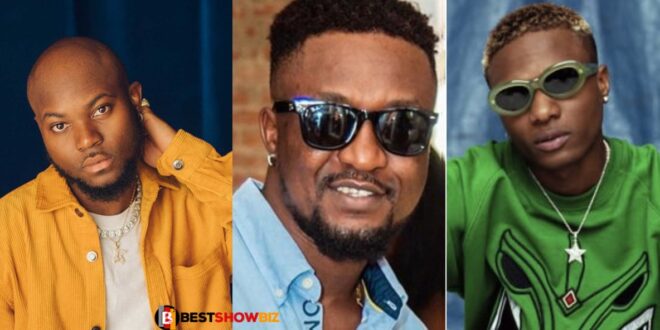 King Promise, Darko Vibes, Paeday, and other artists that have been following Nigerian artist Wizkid around have been slammed by Archipalago on his Instagram page.

According to Archipalago, these musicians have been following Wizkid around like errand boys.

Darko Vibes and King Promise are now in America, rehearsing for their next show. Wizkid, a Nigerian singer, is also in the United States.

These artists have been seen in the United States multiple times. Archipalago, on the other hand, appears to be uncomfortable with their friendship.

Read Also  "I have no problem with Dr. likee, we will be in a movie together soon"- lil win (video)

Archipalogo took to his page to blast his musicians’ colleagues, telling them to stop following Wizkid like errand boys and focus on the reason they went to the United States in the first place: their impending event.

Some artists in Ghana, he claims, are degrading their brands by following Wizkid around.