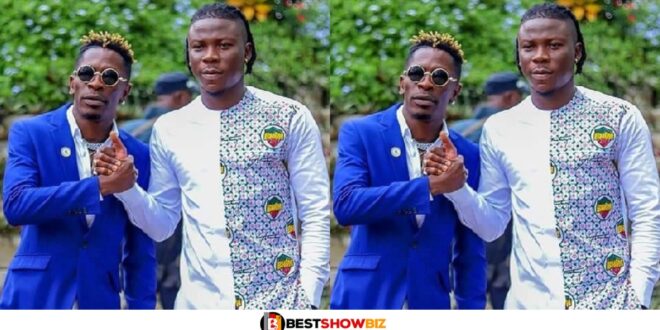 “Stonebwoy is now my brother, i will never fight him”- Shatta Wale

Shatta Wale, a Ghanaian dancehall superstar, has responded to Stonebwoy’s rebuttal to his assertion that Nigerians do not reciprocate the affection Ghanaians provide them, warning anyone attempting to incite them against each other.

He has stated that anybody attempting to squeeze them in order get them to fight each other will be unsuccessful since they have matured beyond that point.

It should be noted that Shatta Wale and Stonebwoy have been involved in a protracted feud for years, which has landed both of them in prison; as a result, they have pledged never to fight each other again.

The dancehall titan added that they’ve learned a lot since deciding to stop their feud, adding that they first followed the love that was shown to them on the internet but have now understood that it was all a sham.

He did, however, declare that it is time to create money rather than fight each other and that no one, no matter how demanding, can force him to beef again.

His comment came after Stonebwoy’s answer to his Ghana – Nigeria support system, in which he applauded him, but he questioned her abundance of grammar in Stonebwoy’s contribution.