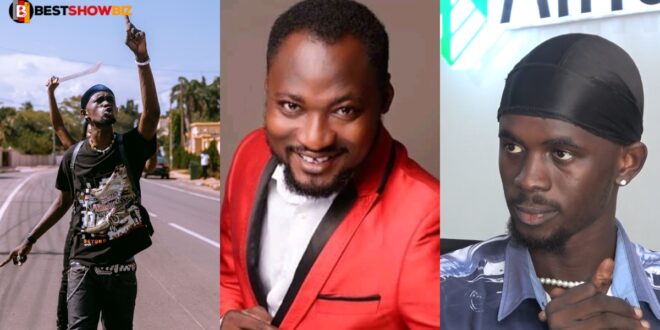 Funny Face has had a lot of relationship problems, and he claims that it’s all because he’s been blinded by his infatuation with women with big backs.

The controversial comic has said that his desire for large buttocks and hips led to an unhappy marriage. The marriage was so terrible that Funny Face’s ex-wife referred to him as a “two-minute man,” remarks that crushed his ego to the point that he confessed to despair and almost suicide.

He’s now with his twins’ mother, who, not surprisingly, is also well endowed in the rear, and their family turmoil has been nothing short of humiliating. So it has to be Funny Face, who knows all about the drama and devastation that comes with a large booty.

As a result, the comedian has taken it upon himself to provide some advice to Black Sherif, who was recently seen looking quite at ease glued to the rear of a woman in a pool. He claims to be a huge admirer of Black Sherif, and as a “botors analyst,” he felt it was appropriate to warn the “Second Sermon” hitmaker about the dangers of enormous butt cheeks.

“pls stay away from WOMen Botos .. especially da big curvy ones .. with a little wave on top and da sides .. pls bro . RUn from where u are perching in dis picture .. BOTOS will kill you .. pls take dis from me as a botos analyst for over 20 years in GHANA 🇬🇭 SHOWBIZ and counting pls take dis advice 🥲🥲😩😩 .. love ur songs Ruff .. especially “ my Destiny