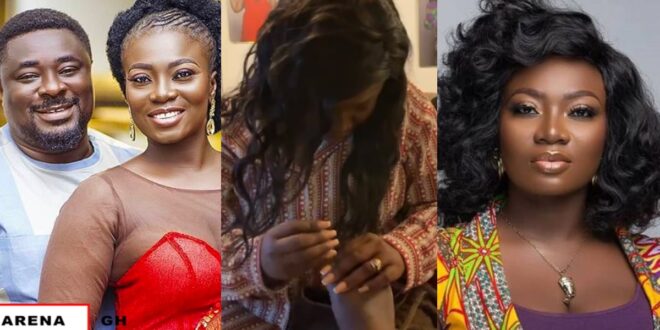 Stacy Amoateng shares private bedroom video to prove that her marriage is not in crisis as people claim.

After reports of a potential marriage crisis surfaced online, Stacy Amoateng purposefully released a video showing how happy her marriage to Okyeame Quophi is blossoming.

On social media, rumors were circulating that Okyeame Quophi is a wife beater who punches Stacy every day.

Stacy was also accused of buying herself presents and pretending on social media that her husband surprised her in order to save the marriage’s face, but this video appears to show otherwise.

Stacy was seen with a smile on her face as she gave her husband a special private pedicure at home, and Okyeame Quophi captured every moment in a video posted on his Instagram page.

The General Manager of Angel Broadcasting Network demonstrated that her role as her husband’s boss has had no negative impact on their relationship.