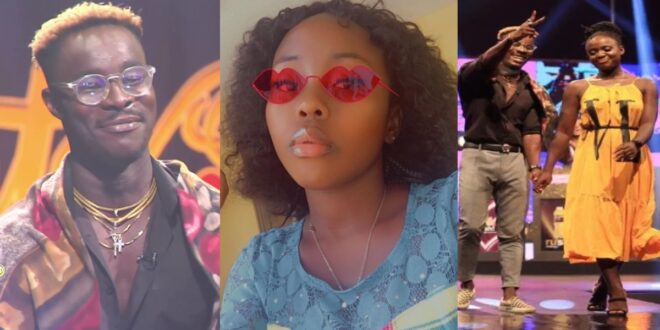 Solomon’s Ex-Girlfriend Reacts to What He Said On Tv3 Date Rush, Reveals More Secrets on their breakup

Naadu Lartey, Solomon’s ex-girlfriend on Tv3’s Date Rush, has responded to claims he made on the love reality show about why they broke up.
If you’ve forgotten who Solomon is, he’s the guy who was trolled by the ladies on Date Rush for wearing a “simple shoe” and had his nails challenged by one of the ladies.

I’m pretty sure you know him and what happened when he was on the love reality show if you look at the photo below.

Solomon had a girlfriend, but he nevertheless appeared on Date Rush looking for a new one, according to bestshowbiz.com.

Solomon and his ex-girlfriend, Naadu Lartey, were a well-known YouTube pair who started a channel to share their love lives with the world.

Jedi and Naadu was their channel’s name, but it was removed by the woman, along with other social media sites where the two were lovers.

Naadu Lartey says she had no intention of responding to Solomon’s video from Date Rush, but because they were popular on YouTube, some of her friends and loved ones sent her DMs, urging her to reply, which she did.

Naadu Lartey said her previous relationship with Solomon was going well, but he wasn’t paying attention to her.

Solomon’s second profile on Date Rush, where he confessed to not giving her the attention she desired, backed up Naadu Lartey’s assertion.

Naadu refuted Solomon’s comment that she never cried when she had issues with him, revealing that even when she cries over something, he doesn’t listen and keeps doing the same thing until he sees the mess.

Naadu revealed that she had contemplated breaking up with him a year earlier but wanted to give him another shot after seeing him on Date Rush looking for a new girlfriend.

Naadu claimed that she ended her relationship with Solomon in October-November of last year because she desired love from him.

More reasons why Naadu Lartey broke up with Solomon can be found in the video below: