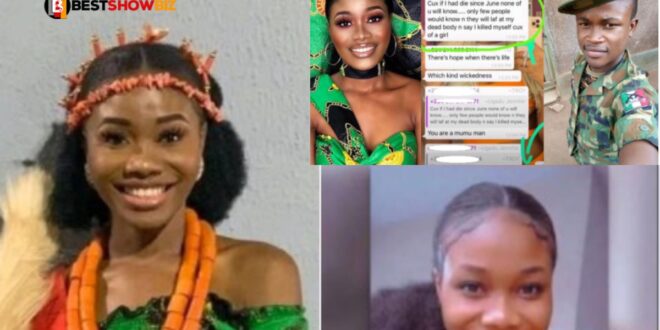 Soldier k!lls beautiful girlfriend for cheating on him, cuts her finger to unlock her phone.

After her enraged soldier boyfriend raped, killed, and hacked off her fingers for supposed adultery, she was killed and the details were later shredded in a WhatsApp group.

They are unable to comprehend how a soldier could conduct such a horrific deed.

Jennifer Ugadu’s friends are mourning her death, while blaming her lover, a soldier, of being to blame.

Jay Matol, the soldier, is claimed to have suspected Jennifer of cheating and raped her before shooting and stabbing her many times.

He allegedly laid her lifeless body on the bed and locked her inside after the alleged murder before fleeing with her phone. He allegedly also chopped her thumb in order to use it to unlock her phone.

He then allegedly went on her department’s WhatsApp group to proclaim that he had killed her and was planning to kill himself.

Check out the following information: