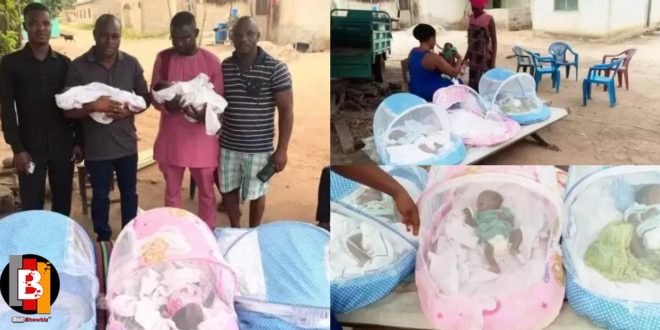 Sad news coming from the Volta Region claims that a woman who gave birth to triplets have died mysteriously 3 weeks after delivery.

the deceased named Charlotte Amewu, together with her husband visited her in-laws at Mafi-Kpedzeglo in the Central Tongu District of the Volta Region to deliver her babies when she was due to give birth.

She was admitted at Adidome Government Hospital in the Central Tongu District where she successfully gave birth to three bouncy babies (triplets), two boys and a girl.

Three weeks after she was discharged, she complained about not being able to breathe and was rushed back to the hospital where she gave up her ghost.

“We called her Doctor who requested we rush her to the hospital which we did but the Doctor said Madam Charlotte Amewu had died before we arrived”, an aunty to the triplets narrated.

The babies have been left without a mother and the family is appealing to the general public for help.