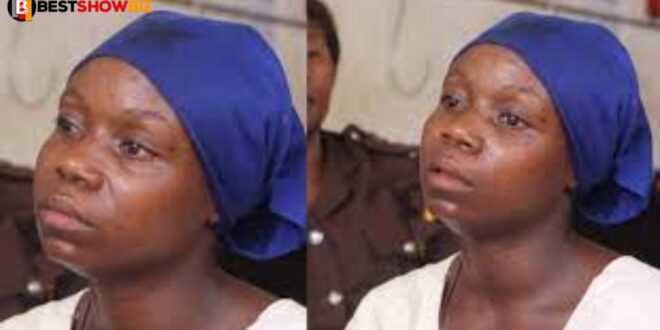 So Sad: Mother jailed in Ghana for stealing Ghc 5 to feed her two children

In a painfully honest account, a 24-year-old Ghanaian woman describes how she was imprisoned after stealing Ghc5 in order to feed her two malnourished children.

In a video posted on Crime Check TV GH’s official Facebook page, Akua Akyaa reminisced about her ordeal leading up to prison.

While telling her story, she revealed that she used to work at a chop bar, where she earned Ghc5 per day on average.

The woman persisted in her claim that when the owner of the chop bar where she used to work encouraged her to stay at home, it became extremely difficult for her to earn enough money to buy food and care for her two young children.

Read Also  Real boyfriend of lady who accused Dr. UN of impregnating her pops up - Video

As a result, she stole Ghc5 from her neighbor in order to purchase rice balls with groundnut soup for her children and herself because she was starving.

When the money owner found out about her deed, he became enraged, and the two became involved in an altercation.

In an attempt to defend herself, Akua Akyaa injured her neighbor as a result of the disagreement.

After being reported to the police, she was later arrested and brought before a judge for questioning.

She was charged with Ghc1,000 in damages and Ghc1,200 in court fines for injuring her neighbor, and she was found guilty in court.

Read Also  "I lost my virginity at age 6"- Abena Korkor

She was sentenced to two months in prison due to her inability to pay her fines, which she admitted to.