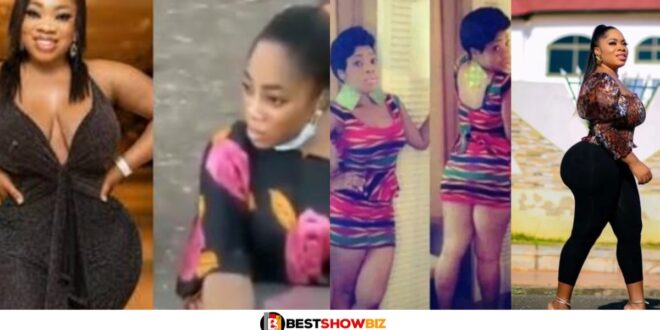 So sad; Moesha’s condition is getting worse (watch video)

Moesha Boduong is said to have visited her boyfriend, a pastor in Nigeria, about two years ago and saw something she wasn’t supposed to see.

After witnessing the alleged “rituals,” the actress and socialite went insane and began acting strangely.

She left social media to seek treatment, and during her absence from the internet, a video of Moesha proclaiming that she has given her life to Christ was leaked on social media.

Moesha also advised young ladies in the video to give their lives to Christ and focus on bettering themselves rather than sleeping with old men for money and other favors.

In the midst of all of this, another voice note that surfaced on the internet claimed that Moesha Boduong witnessed her Nigerian sugar daddy’s rituals and was warned to keep her mouth shut, but she refused, which led to her predicament.

Read Also  Young beautiful blind girl refuses to beg for a living, makes her own bags, and sell for money (photos)

Recently, new videos of Moesha brightened up social media because the actress was seen to be in good health and mind.

She was seen in some of the videos partying with friends and driving her car by herself.

We all thought Moesha was finally free, but IG blogger Tutugyagu Online revealed that Moesha’s health has worsened.

According to the blogger, Moesha is suffering even more now, and her family has given up hope.

Tutugyagu Online begged Apostle Suleman to release Moesha from the spiritual prison she had thrown her into in an Instagram post, saying that two years of driving her insane was enough.

Read Also  "If your husband is cheating, don't leave him for another woman to enjoy, pamper him." Counselor Charlotte Oduro