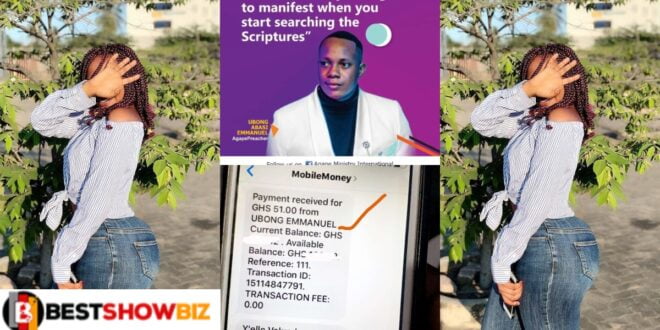 Following an attempt by a pastor of a church in Ghana to pull a fast one on a Snapchat slay queen, the lady has exposed the man of God of his secret dealings.

The pastor is reported to have paid the Snapchat slay queen for a premium nude video. After sending him the 50 cedis via mobile money, the lady forwarded him her R.A.W video over WhatsApp, which he accepted.

It appears that the pastor was not pleased by the Snapchat slay queen’s video that was provided to him and after receiving the video asked the lady if she has moaning and Sqʋiɤting videos.

The pastor instantly canceled the mobile money payment, which means that the lady would not be able to withdraw money until she can demonstrate to MTN that the person who gave her the money did not send it by accident, which may take several days.

The pastor is believed to be called Ubong Emmanuel as seen as the name used in the mobile money transaction.