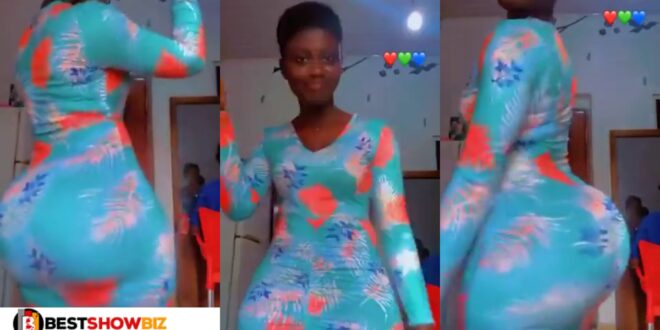 A young woman is taking the internet by storm for bearing a copy of Tik Tok diva Hajia Bintu’s massive bottom.

The well-endowed high school student made her presence felt on the internet by posing subtle challenges to Hajia Bintu.

The young girl, known as Queen Siila, is well on her way to leveraging her athletic abilities to create a life and a name for herself.

Hajia Bintu is well-known for her beautiful large bottom, which she openly flaunts. However, it looks that this young lady will take the throne from Hajia Bintu in a few years.

According to reports, the young woman is a Kumasi-based high school student who has been posting films in which she is primarily seen wiggling her bum, reveling in her good form, and playing to her fans’ fantasies.

As she slowly but surely climbs the fame ladder, attention is progressively drawn to her, with her main goal being to dethrone Hajia Bintu, who she believes has what it takes.