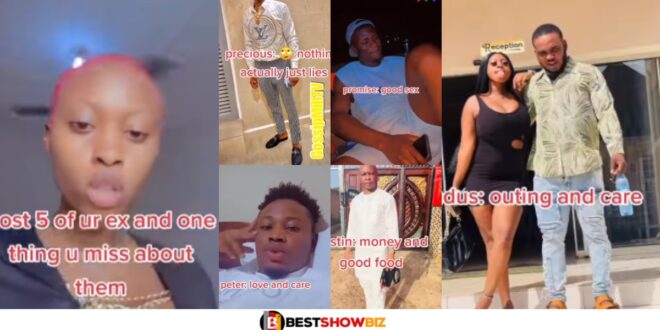 Many social media users were outraged by a video showing a young woman, perhaps between the ages of 25 and 30, talking about her five ex-boyfriends and what she misses about them.

Precious is the first man she shows, and she claims that one quality she misses about him is his habit of lying to her. It wasn’t anything exceptional, but she missed their arguments over his constant fabrications of the truth.

She misses one aspect about Hustin, the second guy she featured in the video, which is how he was supporting her with food and cash. This man appears to be between the ages of 40 and 50, and based on his expression, he is wealthy.

One thing she missed about Kudus, the third guy she portrayed in the video, was going on outings with him and his tender treatment of her.

The following is Peter, who is kind and loving. He most likely showed her genuine affection, but their relationship did not work out.

Promise is the last man she showed in her video, and she claims that he is excellent in bed. This meant that only Promise was giving her a great amount of satisfaction in bed out of the five males.

Some social media users said that after viewing this video, the woman has no shame at all.

She takes pride in the fact that she has dated more than five men, yet none of those encounters resulted in marriage.