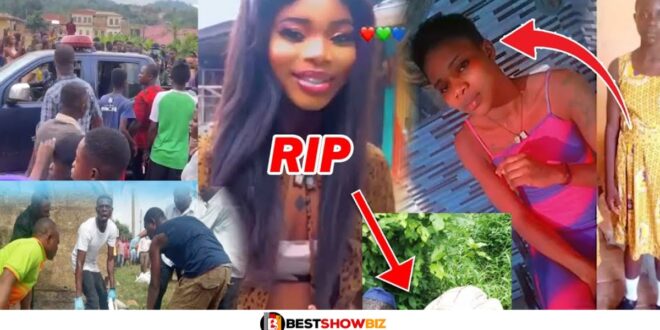 Sister of pregnant 15 years old girl who was k!lled reveals more secrets about what happened (video)

The 15-year-old pregnant girl who was allegedly k!lled by two Sakawa lads has further knowledge about what happened to her sister.

Safowaah Christable’s sister, Maggie, a 15-year-old girl who is known as Safowaah’s sister, has shared new information about her sister’s death.

Maggie revealed to Ghpage that the deceased was her younger sister, who had moved in with her when their mother passed away.

Sadly, Christable walked out of school, traveled to Mankessim, the town where her mother was born, but she eventually returned to Konongo and chose to live with a friend rather than her older sister.

The dead lived with a friend, according to the elder sister, and her attackers came looking for that friend, who wasn’t around.

When the alleged attackers showed up looking for the alleged friend, Christable told them the friend wasn’t there.

Maggie says that rumors in the community say that the alleged attackers wanted to use the alleged companion in rituals, but they didn’t take anything with them when they went back to their Mallam.

When they couldn’t locate the buddy, the Mallam instructed them to bring Christable, so they went back to get her for their rituals.

Maggie said that although the three individuals were detained, the police released two of them.