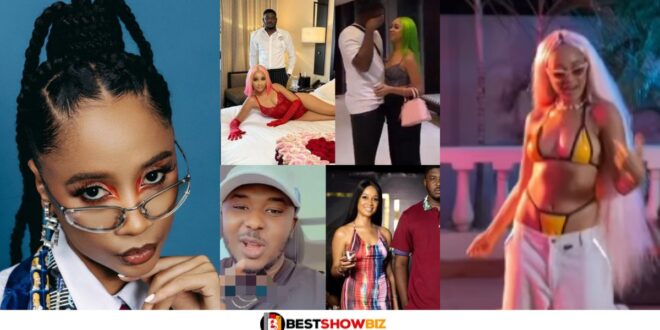 Sister Derby, a self-proclaimed African mermaid, recently ended her relationship with her boyfriend David after dating for just over a year.

After the singer’s relationship with Medikal ended, she hid her new love interest, David, from the public eye on social media for quite some time until November 2021, when she finally came clean about their relationship.

They made their relationship status public on Valentine’s Day of this year by flooding the internet with racy photos, which confirmed that they were having an affair.

Since that time, Sister Derby and David have been constantly promoting one another on their respective social media pages, and the two of them also frequently appear at the same events together.

It would appear that Sister Derby and David have ended their relationship, but the reason behind the split is unknown.

Read Also  "I gave you my husband's money, how can you do this to me"- Married woman cries after her side boyfriend cheats on her

A cursory inspection of Sister Derby’s Instagram page reveals that she has unfollowed David and removed all of the photos that the two of them had taken together.

David has followed in the footsteps of Sister Derby and removed all of the photos that they had taken together after they stopped following each other on Instagram.

The two people who used to be romantically involved have deleted all of the memories of their time spent together that they had previously posted on the internet, and there is no turning back now.

Before this, recent photographs of Sister Derby showed that she was not wearing the promise ring that David had given her.

It’s possible that the singer behind the hit song “Uncle Obama” is feeling down wherever she is right now because she was very confident that she would marry David, but her plans didn’t work out the way she had hoped.

Confirm for yourself that this new information is accurate by visiting Sister Derby’s Instagram page.