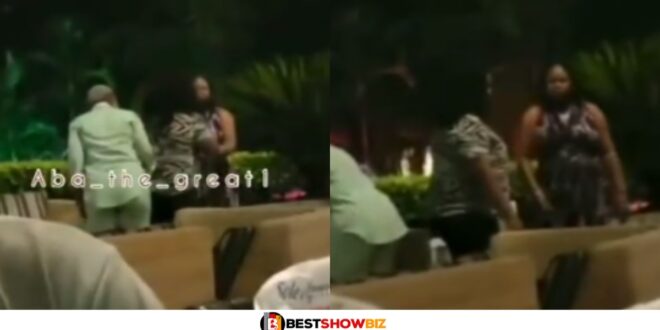 Two ladies were seen on tape arguing in the Marriot Hotel parking lot over a male, and the clip quickly went viral online.

The man’s wife allegedly found out where the husband and his side chick were hanging out thanks to a tip from a mutual friend.

The wife arrived quickly and engaged in a heated argument with the mistress, who protested her innocence. The wife became angry, smashed a bottle, and used the shard to cut the side chick’s face, causing severe bleeding.

Unfortunately, the side chick who was hurt while having a heated argument with her sugar daddy’s wife has passed away as a result of her injuries.

Read Also  Are You Real: White Kids Says As They See A Black Boy For The First Time (Video)

This disheartening information was shared by an insider who slipped into the mails of one of the most well-known bloggers on Instagram in order to provide her with an account of what took place following the fight.

The post claims that the woman is dead, and that the man’s wife has been identified as the prime suspect.