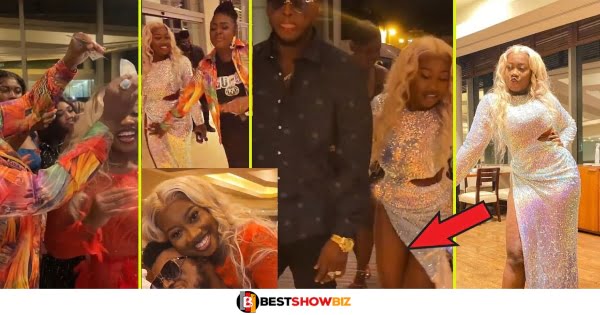 Shugatiti, a socialite and aspiring actress, has dominated social media after accidentally displaying her vag!na at her 21st birthday celebrations last night.

Videos from the lavish birthday celebration, which have gone viral on social media, reveal how a slew of other celebs, including Kwaku Manu, Tracey Boakye, and others, descended on the Kempinski Hotel (Accra) to toast the young showbiz star.

Shugatiti instinctively raised her dress in one of the videos that was shared online, despite the fact that she was not wearing a pant.

Shugatiti’s raw “Akosua Kuma” can be clearly seen in the video, which has gotten a lot of attention on the internet right now.

Shugatiti’s dress was intentionally elevated for her ‘Akosua Kuma’ to show, according to some social media users, in order to get it into the trends and make the news.

Others have suggested that it was merely a wardrobe malfunction and that she does not deserve the harsh criticism she has received.

Some trolls have questioned why she has a bushy her Akosua Kumas when a shaving stick costs less than 2 cedis.