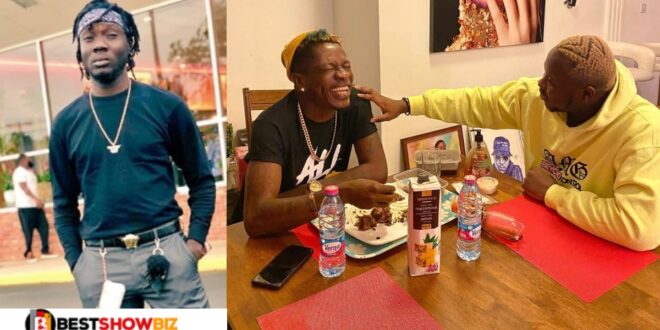 As a result of the current trend of Ghanaian celebrities being arrested and prosecuted, Showboy, who is serving more than 6 years in prison, has reacted.

Shatta Wale, Medikal, and other celebrities were dubbed “dumb” by a Ghanaian entertainment critic based in the United States for taking their freedom for granted.

Ghanaian celebrities, according to the CEO of 2HypeGeng Record Label, believe it is fashionable to have a criminal record, so they are misbehaving in order to spend time in prison.

People like Shatta Wale, according to Showboy, who force themselves into prison are fools because they are unaware of the freedom they have roaming free outside bars.

“See how Shatta Wale is forcing prison time on himself smh. This n**ga fool… all to promote an Album that go take 72 hours fade off.. Ghana gunsta no be gunsta ooh.. u have ur freedom and u dey take joke eii.. wagyimi paa ooh”,

An Accra Circuit Court remanded Shatta Wale to one week in prison yesterday after he claimed he had been shot and was in critical condition the day before.

The musician was heard screaming at the top of his lungs as the police escorted him out of the courtroom, saying that he wants to spend the rest of his life in prison.